skip to main | skip to sidebar

I don't know what is sweeter, Mattie (said adoringly, and because it fits the tone better than Matthew or Matt here) or the cherry pie. He came over with some wine to celebrate the poems on notellmotel.org and partake in the great cherry pie endeavor. After a few drinks, we had some more dessert---poetry style :)

What about the cherry pie?
that which is red I s'pose
it's true, and voices in the other room.
the crash and a'la mode
or maybe the tv?
like children in the basement.
She fluted the crust, said she heard nothing
which was a lie, obviously, sirens, for example
but she protested the hidden paper.
Four and twenty blackbirds, she had seen it coming.
Preheat to 400 degrees, oh yes,
and something should be said about the wine;
I know I'm having cherry pie, he said, it's all I know.
If she had said it was her first, would he
fall for her sweet sweet lie? Yes.
Posted by Carly at 3:37 AM

the why and later 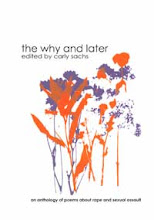 Order the why and later